Listen to a recording of Greer Gilman reading from Cloud & Ashes, recorded at Boskone 2010:

Cloud & Ashes was joint winner of the 2009 James Tiptree, Jr Award, an annual literary prize for science fiction or fantasy that expands or explores our understanding of gender. The Award Council said: "We on the jury admired Cloud & Ashes for its originality and found it a beautiful and highly memorable work." 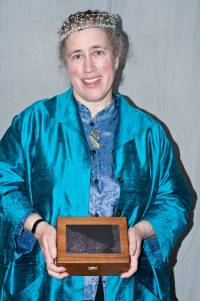 The picture shows Greer Gilman holding her award, an antique music box, with an engraved plate showing the cover of the book. (Watch a video of the Ballad Box on the author's LiveJournal).

Cloud & Ashes was a Finalist for the Mythopoeic Fantasy Award for Adult Literature, given to the fantasy novel, multi-volume novel, or single-author story collection for adults published during the previous year that best exemplifies "the spirit of the Inklings".

It featured heavily in the Best of Year round-up at Strange Horizons: Paul Kincaid said "The stand-out novel of the year was fantasy: Cloud & Ashes by Greer Gilman: not an easy book to read and not, I think, a novel that people will love, but it is one I admire with a passion." Adam Roberts agreed: "As for the year's best fantasy novel: well, let's go with Greer Gilman's sui generis, densely lyrical Cloud & Ashes." while Matt Denault said "I'd also commend Greer Gilman's Cloud & Ashes: Three Winter's Tales as perhaps the SF&F achievement of the year: Gilman outdoes even Gene Wolfe as an archivist of language, and her new volume has a Wolfean appreciation for masks and performance, hierarchy and change."

It is included on the Locus Recommended Reading list for 2009. In the Locus End of Year Review, Faren Miller wrote, "This is my favorite among the fantasies, for its meld of three ostensibly separate tales into a strong unit, its awareness of both scholarship and myth and the power they hold over us mortals, its fully developed characters and an eloquence that borders on poetry yet never crosses over into insubstantial visions where words are cast adrift from their earthly roots." Graham Sleight commented that Gilman's influences "were bone-deep, and started with the Oxford English Dictionary ... I can think of no one - inside or outside speculative fiction - who's currently creating this kind of linguistic density."

"I am drunk on the words, I am feasting on the allusions that are both timeless and contemporary, that seem to take us to the very root of folklore and to its most modern expression, that is every legend you have ever heard and a tale you have never encountered before. It is pure story; enter at your peril...

"Cloud and Ashes is not an easy book to read, but it is incredibly worth while making the effort. Any sense I have given of what goes on here is inevitably only partial, there is so much I have had to omit, major characters, significant plot lines. Above all, I have barely hinted at how much it plays with gender roles, how much it has to tell us about the role of women in shaping the world, indeed how every potent active character is female. It is a book you will barely grasp, but it is a book whose hold on your mind, on your memory, is assured."

"Greer Gilman's Cloud & Ashes is fantasy the way it should be done. It's a uniquely voiced view of a fully realized world filled with compelling characters. Old North English diction drives an initially fragmented story into coherence; it's like having folk songs sung to you while you rise into dreams. Like everything else from Small Beer Press, it's excellent"

"Greer Gilman has a new book out! This is reason enough for women to swoon and men to throw their hats in the air...

"Let me caution you that Gilman's work is caviar for the cognoscenti. This is not a pun-filled, fast-paced romp through easily-digested lands of wish fulfillment fantasy. No. This is more like... like... did you ever wonder what Le Guin's dragons read when they're at home? Deep, cosmic, uncompromising and (let's be honest) difficult? Something like that.

"That said, an intelligent teenager can read this book and be as blown away by it as I was. I honestly believe that Cloud & Ashes is going to profoundly change a few lives."

"No one writes like Greer Gilman. No one else dares. Cloud & Ashes is an extraordinary, beautiful book that has drawn comparisons with Shakespeare and James Joyce, amongst others. Read it. That is all."

"Cloud & Ashes is subtle and complex; it is wise ... It's a tale, or tales, not just for reading, but for pondering and rereading. It's a book to pluck off the shelf of a winter's night, just for the sake of wandering again within its pages; for the sake of finding unnoticed connections, for savouring language, and for pondering the nature of stories, souls, and the stars."

"'Green quince and bletted medlar, quiddany and musk': Greer Gilman fills your mouth with wincing tastes, your ears with crowcalls, knockings and old, old rhythms, your eyes with beautiful and battered creatures, sly-eyed, luminous or cackling as they twine and involute their stories. Gilman writes like no one else. To read her is to travel back, well back, in time; to wander in thrall through mist on moor and fell; to sink up to the nostrils in a glorious bog of legend and language, riddled with bones and iron, sodden with witches' blood."

"Greer Gilman is a master of myth and language with few equals in this world. Cloud & Ashes is a triumphant, heart-rending triptych, a mosaic of folklore, intellectual pyrotechnics, and marvelous, motley characters that takes the breath and makes the blood beat faster."

Catherynne M. Valente, author of In the Night Garden

"I stand by my earlier claim that Gilman is one of the most inventive writers in the English language since Joyce (to which I would add Nabokov). Her prose is layered, lyrical, allusive, revelatory. Conjures up the Green Man, the Moon's Huntress and the Queen in the Wood without ever, ever falling into twee habits. As Heaney says in Bone Dreams, Gilman is able to 'push back /through dictions,/ Elizabethan canopies/ Norman devices/...'"

"...this year Greer Gilman's Cloud & Ashes seemed to me probably the greatest achievement in SF&F... years in the writing, a feminist approach to a type of tale Gene Wolfe is known for, one of masks and hierarchy, with also a Wolfean attention to language."

Matt Denault comment in OF Blog of the Fallen

"But there's a truth that the cosmogony gets at that can't be avoided. Nature is beautiful, wondrous - but cruel, too, pitiless: demands death at times.

"What made the whole not only bearable but transcendent for me was the climax and the conclusion, as time wove in on itself, and characters wove in on one another - characters from the edges of the world and from the past - and people's cosmogonic roles and their in-time lives slid together like stereopticon pictures, and the characters changed the pattern of life forever. It was a tour de force, a true marvel."

"Seeing through the skin of this world is not an easy task. Discovering the eternal beneath the everyday is the work of prophets; describing the eternal for the everyday, the work of mad prophets. Yet when we read their words, these literary stepchildren, who perhaps appear once each generation, bring us ease and understanding. This work is a balm that soothes the landscape with language...

"Gilman's powerful work derives its potency from her lyrical language. She's as much a poet as she is a prose stylist and each word is carefully placed for reasons at once apparent and yet somehow mysterious, tethered to a realm beyond words. Gilman's descent into myth and the underworld is from the get-go clearly not an everyday experience. When you sign up for Cloud & Ashes, you're pretty much signing up for a permanent change of perception."

"A work that reads like language stripped bare, myth tracked to its origins. Seasons, weather, lust, pain, sacrifice - the stuff of old ballads becomes intensely real ... And the payoff is immense. I finished Cloud & Ashes almost tempted to write a thesis that compares it favorably to what James Joyce did in Ulysses and tried in Finnegans Wake, yet feeling like I'd lived through it all. Amazing."

"Cloud & Ashes is a dark pastoral shaped from bits of ballads, scraps of nursery rhymes, fragments of Tarot, tatters of ancient myth, and shreds of archaic language, all shot through with luminous ribbons of Gilman's own personal cosmology. Gilman includes no map nor glossary to her world, but instead lets the language itself - and it is a language as dense and rich as an old gingerbread recipe - do the work of world-building."

"Sublimely lyrical Jacobeanesque dialect... readers who enjoy symbolism and allusion will cherish Gilman's use of diverse folkloric elements to create an unforgettable realm and ideology."

"Her new book ... recalls James Joyce for its playfulness and inventiveness ... Cloud & Ashes is an incredible achievement, a work rich with word play and potent symbolism. Whether you delight in unravelling multi-layered meanings in a text or if you simply enjoy the floating sensation of allowing richly figurative language to wash over you and carry you along, Cloud & Ashes is a book you will turn back to again and again."

"It was a revelation... to see how perfectly the organic structure grows, and how everything fits together (even Moonwise is cunningly stitched into the mythology.

"And Cloud & Ashes is a novel about mythology. It depicts a world which, like our own, marks the succession of the seasons, the turning of the year, with ritual, with songs and mummers' play and the taking on of rôles. The dance of the constellations is the dance of the stones in their circle is the dance of the mummers in their play is the fall of the cards of Jack Daw's pack (which is and is not the tarot). But in Cloud, what is enacted is also real... This is, in itself, an enchantment, and riches enough for a book. 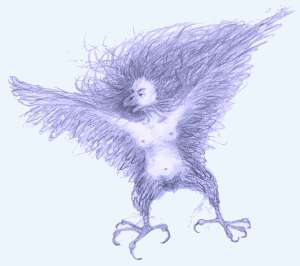 Jean Rogers (She Who Must, LiveJournal)

"No one else writes like Greer Gilman. She is one of our most innovative and important writers, in fantasy or out of it. If you want to see what language can do, the heart-stopping beauty it can achieve, read Cloud & Ashes."

Theodora Goss, author of In the Forest of Forgetting

Artist Kathleen Jennings wrote in her blog about creating the jacket design for Cloud & Ashes (with illustrations of her studio and the work in progress).


A Crowd of Bone was orginially published in Trampoline; read this story online.